DUI cases require a scientifically driven defense
Most DUI investigations involve either blood being drawn or a breath test being taken.  Some of the issues that arise regarding blood testing are addressed here.  Most people (and unfortunately many “DUI” Lawyers) generally believe that if you take a blood test in a DUI investigation the results of an analysis of the blood are highly accurate and not subject to contest.  Nothing could be further from the truth.  This perception is not reality and simply stems from a lack of knowledge.

Collection of blood
The manner in which the blood is collected, or drawn can affect the integrity of the blood specimen.  Studies have shown errors associated with the blood draw can lead to false positive analysis as high as 50%.  The drawing of blood is a sensitive medical procedure.  While there are exceptions, most persons typically performing the blood draws have limited background or training in the medical field.  Despite a lab coat or laminated ID card most of these individuals have completed a program consisting of no more than a 40-hour training course and 40 hours on the job training without any real understanding of the significant medical aspects of drawing blood.  As a result of this minimal training the integrity of the specimen is often compromised.

Studies have shown errors associated with the blood draw
can lead to false positive analysis as high as 50%.

Storage of the blood sample
The manner in which the blood is stored and maintained prior to being analyzed is a further source of error  leading to false positive results.  Studies have shown error rates well over 100% can result from delays and improper storage of blood specimens.

All the conditions necessary for fermentation are present within the blood vial.  This includes amongst others the presence of yeast, bacteria and sugar that are normal substances in your body.  Even short delays or changes in temperature can exacerbate the conditions leading to fermentation. Fermentation is the process by which alcohol is formed. As a result of fermentation, the amount of alcohol in the blood vial where the specimen is held will increase so that the total amount of alcohol in the blood specimen is a false high representation of what was actually
contained in the person’s veins. 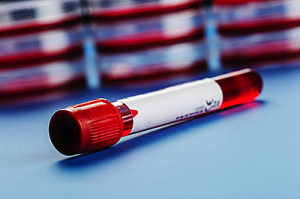 The improper storage of DUI blood samples prior to
testing is a common source of false positive results.

Testing of the blood
Most forensic labs involved in analyzing blood specimens for alcohol on behalf of law enforcement use a procedure involving a machine known as a Gas Chromatograph.  Often times the manner in which this equipment is employed results in a presumptive determination of alcohol as opposed to a confirmatory method specific to alcohol.  This method can cause compounds which may respond to the method of detection in a manner similar to alcohol to be falsely measured as alcohol.  Additionally, this method cannot determine whether the alcohol being measured was originally present in the person’s vein or whether the alcohol being measured is that formed during the delay before analysis has occurred.

Manipulation of analysis data
Another serious problem that must be investigated has to do with the parameters being set during the stage of analysis when data is being collected.  Most forensic labs set parameters on reporting data that conceal significant shortfalls in their chromatography method. They accomplish this by setting the data reporting parameters to exclude accounting for volatile compounds that would disclose errors in their method, as well as indications of contamination and fermentation of the subject specimen.  Because most forensic labs are involved with a high level of volume in  their specimen analysis, they don’t take the time to be precise and accurate in their methods but will engage in this practice to cover up their systemic problems.  This practice persists for the simple reason that very few attorney have the capacity and understanding to address this problem.

Lack of Error Reporting by Forensic Labs
Finally, most forensic labs are reporting the results of their analysis without having scientifically determined the actual rate of errors involved with their process.  Failure to ascertain the total uncertainty or range of error associated with the lab’s method is not a scientifically sound or valid procedure.  Most lab accreditation organizations are now requiring labs to ascertain and report the range of uncertainty associated with their method.  This is a complex process that requires the lab to continually ascertain, update and maintain that determination. Law Enforcement Forensic Labs are often either not competent or not  concerned with adhering to sound scientific procedures.  As a result forensic labs often report an arbitrary and scientifically invalid blood alcohol concentration level.

If you’re arrested for a DUI, you need immediate professional DUI representation
The information provided here is not intended to be a technical discussion but rather to help the reader understand that when a person gets pulled over and arrested for Driving Under the Influence (DUI), and takes a blood test; the results from the analysis are not always scientifically valid  In order to establish the lack of scientific validity your attorney must understand the science and understand how to persuasively convey the science to the listener. The Law offices of Johnson & Johnson have that critical expertise. Call today at (925) 952-8900.

Recent DUI case examples
These are few recent examples of cases handled by The Law Office of Johnson & Johnson regarding  allegations of Driving Under the Influence in California:

People v. M.M.: Client pulled over for speeding and not maintaining lane.  Client blew a .13 on a preliminary breath test and had poor FSTs.  Client was arrested and later took a blood test analyzed by the Government Lab which reported a .13 BAC.  We challenged the legality of the blood draw before trial by raising a medical challenge to the manner of the blood draw and the blood test was determined to be unlawfully taken and therefore suppressed.  At trial we established the deficiencies in the maintenance and calibration of the breath testing device and thereby undermined the scientific validity of the breath test results.  The jury returned a verdict of Not Guilty.

People v. D.D.: Client was pulled over for speeding and weaving, refused to perform FST’s.  Client was arrested and blood was forcefully taken.  Blood analysis by the Government lab showed a blood alcohol level of .09.  We chose a strategy of challenging the scientific validity of the blood analysis based on a forceful blood draw undermining the integrity of the specimen prior to analysis.  The Jury returned a verdict of Not Guilty.

People v. G.N.: Client was a commercial driver, is seen weaving, stopped by Fire Chief; CHP takes over the investigation.  Poor FSTs. Preliminary Breath Test .13, Evidentiary Breath Test .13; We determined client suffered from Gastro Esophogeal Reflux Disease (GERD) commonly known as Acid Reflux.  We pursued a Med-Legal strategy challenging the scientific validity of the breath test results based on his medical condition. Jury returned a verdict of Not Guilty on all counts.

People v. M.I.: client pulled over for speeding and weaving.  Poor FST’s and Preliminary Breath Test of .12.  Client Arrested and chose evidentiary breath test, results were .11.  We attacked the scientific validity of the reported result based on failure to provide a measurement uncertainty.  The jury returned a verdict of Not Guilty.

People v. R.N.: Client involved in single car collision after reported to be speeding by several motorists. Client arrested and took a blood tests with results of .18 BAC.  We challenged the scientific validity of the blood analysis.  The case was dismissed by the Court following the prosecution’s case during trial.